Maldives (/ˈmɔːldiːvs/, US: /ˈmɔːldaɪvz/; Dhivehi: ދިވެހިރާއްޖެ, romanized: Dhivehi Raajje), officially the Republic of Maldives, is a small archipelagic state in South Asia situated in the Indian Ocean. It lies southwest of Sri Lanka and India, about 700 kilometres (430 mi) from the Asian continent’s mainland. The chain of 26 atolls stretches from Ihavandhippolhu Atoll in the north to Addu Atoll in the south (across the Equator). Comprising a territory spanning roughly 298 square kilometres (115 sq mi), Maldives is one of the world’s most geographically dispersed sovereign states as well as the smallest Asian country by land area and, with around 557,426 inhabitants, the 2nd least populous country in Asia. Malé is the capital and the most populated city, traditionally called the “King’s Island” where the ancient royal dynasties ruled for its central location.[13]

The Maldivian Archipelago is located on the Chagos-Laccadive Ridge, a vast submarine mountain range in the Indian Ocean; this also forms a terrestrial ecoregion, together with the Chagos Archipelago and Lakshadweep.[14] With an average ground-level elevation of 1.5 metres (4 ft 11 in) above sea level,[15] and a highest natural point of only 5.1 metres (17 ft), it is the world’s lowest-lying country.[15] 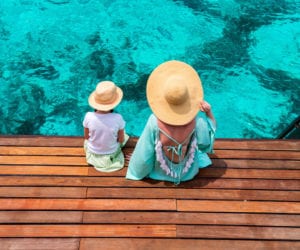 The Best Maldives Hotels With Slides Your Kids Will Love 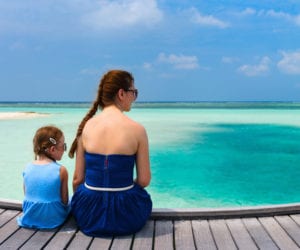 Fabulous Family Hotels in the Maldives that Kids Will Love 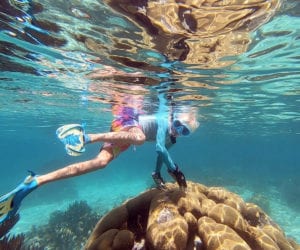 13 Best Places to Snorkel with Kids Around the World

13 Best Places to Snorkel with Kids Around the World

Snorkeling is an extraordinary family activity that can be experienced in various locations around the world and still feel different every time you go. These diverse locations offer varying amenities, marine critters, and water temperatures, to assist you in finding the best kid-friendly snorkeling location for your family — pick one for your next family vacation!

Fabulous Family Hotels in the Maldives that Kids Will Love

Are you looking for the best family hotels in The Maldives? You’re in the right place! Divided by hotels with kids clubs, all-inclusive options, hotels with slides, and hotels with underwater restaurants, we’re sure there’s an option your kids will love on this list. Keep reading for our list of Exciting Family Hotels in the Maldives that Kids Will Love!

The Best Maldives Hotels With Slides Your Kids Will Love

Sign-up to receive an email with a PDF of our exclusive parent-designed, kid-approved printable activities and games!By signing up, you will also receive our wonderful newsletter filled with the best travel advice and recommendations.